Shizuru Isurugi (石動 静流 Isurugi Shizuru) is one of the minor characters in Free!'s third season, Free!-Dive to the Future-. He is a 1st year high school student at Iwatobi High School and a new member of the Iwatobi High School Swim Club under Rei Ryugazaki's captaincy.

Shizuru is a taller than average young man with dark brown hair, blue eyes and a somewhat dour expression at all times. During training, he wears the usual uniform of the Iwatobi swimming club.

Shizuru first appears when Nagisa wants to take photos of the new club members in order to send them to Makoto. Later, Shizuru can be seen practicing at Iwatobi SC Returns where Iwatobi's team begins preparations for Nationals. He expresses great interest in the camel that appears in the promotional video for the Iwatobi High School's swimming club. He is the one who discovers the guide from Gou's island training camp from years ago.

When Ayumu says Gou's name descriptions are too long, Shizuru mentions that "Perfect Killer Handsome Muscles" was a big hit[1]. In response to this, Ayumu asks for who and Shizuru replies with "my grandpa" implying that Ryuji Azumu, also known as PKH Azuma, is his grandfather. 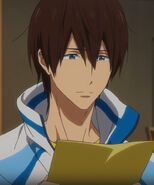 Retrieved from "https://free-anime.fandom.com/wiki/Shizuru_Isurugi?oldid=46436"
Community content is available under CC-BY-SA unless otherwise noted.