Samezuka Academy (鮫柄学園 Samezuka Gakuen) is an all-boys high school known as a swimming powerhouse. Students can live at home and commute to school or choose to board in the school's dormitories because of various study, sport or personal needs.

The following list shows school members and their status in Free!-Dive to the Future-:

The Samezuka Academy Swimming Club's captain is Rin Matsuoka, who succeeds Seijuro Mikoshiba after the latter graduates. Rin's childhood friend Sosuke Yamazaki also transfers to the school and joins the team. One of its notable members aside from Rin, Sosuke and Seijuro is Aiichiro Nitori, a second-year boy who shares a room with Rin and then Momotaro Mikoshiba after Rin graduates. The Swimming Team holds joint practices with the Swim Club of Iwatobi High School from time to time.[1][2] After Rin's graduation from the academy, Aiichiro is appointed as the new captain. 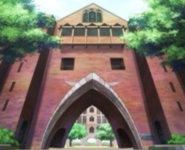 Close-up of the school's logo

During the Cutural Festival, it is tradition for the Swimming Club to hold a maid cafe. It is mandatory for all members of the club to participate in it, and anyone who does not must quit the Swimming Club. Tradition dictates that first and second year students must dress in female maid outfits while the third years are to dress up as male butlers. [7]

Retrieved from "https://free-anime.fandom.com/wiki/Samezuka_Academy?oldid=72011"
Community content is available under CC-BY-SA unless otherwise noted.