Ryuji Azuma (東 龍司 Azuma Ryūji) is a former competitive swimmer[1] who currently coaches Haru. He was  Mikhail Makarovich Nitori's rival when they both were younger and in competition as swimmers. They now maintain a friendly rivalry as professional swimming coaches.

Ryuji is tall and slim, with unruly dark hair and bangs parted to the right of his face. He has narrow, dark grey eyes and light stubble on his chin. He is first seen wearing a black trenchcoat, worn unbuttoned. At other times he wears either a blue tee-shirt or blue collared-shirt and a dark gray or black un-buttoned blazer.

Ryuji is a former competitive athlete with a keen eye for new talent. He prefers working with individuals for whom swimming is a life passion versus a competitive goal. When he learns about Haruka, he is immediately interested but rather than openly approaching Haru, he is cagey and makes his presence known in subtle ways, such as talking about his food blog. His skills as a coach are good and Haru respects him, having been able to learn the other three competitive swimming strokes in time to be able to swim with Ikuya during the College Championships. Makoto remarks that he seems like a decent guy and is flattered when Ryuji tells him that he has the potential to become a professional trainer after seeing how well Makoto deals with Haru's stubborn nature when being coached. Ryuji is a bit of an enigma - rebellious but knowledgeable about the world of competitive swimming.

An alumnus of Iwatobi High School and the Iwatobi Swim Club, he is remembered as being an extremely powerful swimmer with a promising career in the competitive scene. He was known as "Fully Built Ryuji"[1] and on a path to greatness when an yet-unspecified event causes him to lose his competitive edge and he suddenly retires. After retirement, he begins coaching overseas. He returns to Japan and writes a food blog while searching for a talent worthy of his coaching skills. He believes Haruka has yet to reveal his true potential as a swimmer and is wasting his energy on personal relationships.

"Fully-built Ryuji" in his competition days. 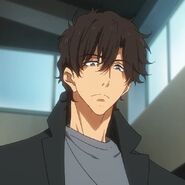 Ryuji frustrated with a stubborn Haru.

Ryuji appearing as a professional coach at tournament.|
Add a photo to this gallery

Retrieved from "https://free-anime.fandom.com/wiki/Ryuji_Azuma?oldid=46435"
Community content is available under CC-BY-SA unless otherwise noted.