Romio is a young man of medium height, with short reddish hair and blue eyes. During training, he wears the usual uniform of the Iwatobi swimming club , and during relays he wears green swimming goggles and blue swim briefs with yellow stripes.

Romio was born in New York, lived some time in Tokyo, and then transferred to the Iwatobi High School. In a middle school tournament, he false-started causing that tournament to be their last and this experience resulted in Romio being afraid of starting off the block.

He first appears when Nagisa wants to take photos of all the club members and send them to Makoto. Later, Romio can be seen practicing in Iwatobi Swimming Club where Iwatobi's team begins preparations for All-Japan Invitational. When Shizuru found the guide from sempai's deserted island training camp, Romio says that he wants the training camp in another country. 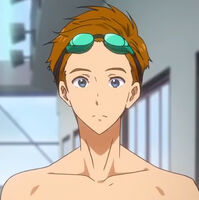 Retrieved from "https://free-anime.fandom.com/wiki/Romio_Hayahune?oldid=40218"
Community content is available under CC-BY-SA unless otherwise noted.