Rei Ryugazaki (竜ヶ崎 怜 Ryuugazaki Rei) is the main character in the anime series Free!, beginning with Free!, and the light novel High☆Speed！ written by Kouji Ohji. [3] He is a butterfly swimmer and a third-year high school student at Iwatobi High School. Rei is a former member of the Track Club before being recruited by Nagisa Hazuki for the Iwatobi High School Swim Club. After Haruka Nanase and Makoto Tachibana graduate, he becomes the new captain of the Swim Club.

Rei is a muscular young man with purple eyes and short, dark blue hair. He wears crimson-framed corrective lenses because he is near-sighted. His fall and winter high school uniform consists of light brown trousers, a white shirt with red necktie, a dark gray unbuttoned blazer, and black-and-white sneakers. During the spring and summer, his summer uniform consists of gray trousers, a white shirt with a dark gray collar, red dotted necktie and black-and-white sneakers. His uniform as a 3rd-year would change only in the color of his necktie being green. While pole vaulting, he wears a pair of orange lens sports glasses, white sleeveless sports top with yellow and black stripes, shorts, black short-legged tights, and blue spike sneakers. While swimming, he wears black, long-legged swimskins with a blue pattern. The most developed muscles of his form are his tricep and abdominal muscles (upper arms and abdomen).

He is an intelligent and logical individual with a penchant for beautiful things, the thought of exuding anything but beauty through his actions causing him to dramatically lose his cool.[5][2] He is also quite comical when he lets his self-doubt get the better of him. He is, however, a hardworking and determined individual, as seen in his relentless drive when learning to swim despite several failed attempts.[2][6][7]

Rei has a theoretical approach when it comes to sports,[5] as he usually calculates distance, angle, and other factors in his mind before actually making an attempt. Because of his rigid nature, he has a tendency to overlook the fun and enjoyment that comes with the activity. As Haruka told Rei, he needed to be "free" in order to swim properly, because he is constantly calculating and underestimating the water.[2] He has a unique laugh that is easily identifiable.

Rei meets Asahi Shiina when they are both in elementary school, but do not meet again until Rei is competing as a high school senior and Asahi is in college attending the high school tournament as a spectator. They accidentally pass one another and suddenly remember their early encounter. 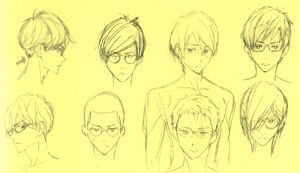 Hiroko Utsumi said in an interview that Rei initially felt cool like Haruka, but as soon as he opened his mouth and started to frolic, that similarity ended immediately. She added that he was the type of person girls would complain, "he looks so cool, but it's such a shame he had to open his mouth...". He's said to be a quibbler in the theory side of things, but have a problem in the heart of things. His face immediately expresses whatever he feels, so he's easy to read. He loves beautiful things, so his appreciation of beauty is very high. His sense of beauty overdoes it to the point where he always tucks his shirt in. Utsumi said to look closely and you will see he does everything properly, even ensuring the straps on his backpack are perfectly tight around his uniform.