Nagisa Hazuki (葉月 渚 Hadzuki Nagisa) is one of the main characters of the anime series Free! and the light novel High☆Speed！. He is the breaststroke swimmer on the Iwatobi High School swim team and a 3rd-year high school student at Iwatobi High School.

Nagisa is a young man of average build with wavy, honey-blond hair and magenta-colored eyes. His fall and winter school uniform consists of light brown trousers, a white shirt with red necktie, tan sweater, dark gray unbuttoned blazer, and black shoes. During the spring and summer, his uniform consists of gray trousers, a white shirt with a dark gray collar, a tan sweater vest, red dotted necktie and white shoes. His uniform as a 3rd-year changes only in the color of his necktie being green.In the beginning of the series, he is seen wearing red swim jammers with a yellow star pattern;[4] however, he later switches to black swim jammers with a pink pattern. The most developed muscles of his form are his soleus muscles (calves).

Nagisa has a cheerful and straight-forward personality. He is very opinionated and usually speaks his mind. It was this attitude and his enthusiasm for swimming that established the current Iwatobi Swim Team in the first place, after a long lapse.[1] He can get very enthusiastic about things that catch his eye and if there is something that even remotely interests him, he will instantly act upon and pursue those feelings.

Nagisa has admired Haruka Nanase's swimming style since elementary school, enrolling at Iwatobi High School in the hopes of swimming with his former teammates, as he previously attended middle school away from Haruka and Makoto Tachibana.[1] He can be quite pushy in achieving his goals, especially when Haruka doesn't share an opinion with him, however, this helps Makoto convince Haruka to do something (most of the time).[1][5] In addition, Nagisa lacks manners to some extent, frequently speaking with his mouth full of food, with a tendency to be noisy and untidy.[6]

Nagisa also has a certain rebellious side, as seen when he insisted on sneaking into the indoor swimming pool of Samezuka Academy, which was closed at the time, committing trespass.[1] He often behaves in a childish manner and seems to lack inhibitions, as seen when he goes skinny-dipping in Samezuka's pool and does other things most people would find embarrassing.[1] He is shown to be sly in having his needs met and stubborn, especially when it comes to Gou Matsuoka's name, for no matter how hard Gou tries to make him call her "Kou" (which she considers more feminine), he insists on calling her "Gou", much to her dismay.[1][7][4] Although he tries to be helpful to his friends, his solutions to problems are often unconventional and usually to his benefit. He is particularly close with Rei Ryugazaki, though he gets along well with everyone in the series and has many friends.

When Haruka and Makoto begin attending Iwatobi Junior High School, Nagisa is left behind at Iwatobi Elementary School. Because of this, he goes to swimming practices at Iwatobi Swimming Club alone.

When Nagisa starts practicing butterfly with Rin, his breaststroke evolves into the butterfly, but Nagisa wantsd to evolve the butterfly even further and to be able to swim all strokes, like Rin, in order to swim as an Individual Medley swimmer. Since his first appearance in a tournament was as a team member with Haruka, Makoto and Rin, he feels uneasy at the thought of swimming alone.

Also, while still an elementary school student, Nagisa's three older sisters often dress him up in girls' clothing and put makeup on him. One day, when they switch their swimsuits with his, Haruka offers to lend him a swimsuit and take his sister's. Ever since, Nagisa has greatly admired Haruka, however, the bullying by Nagisa's sisters continue into high school and, time after time, they switch his swimsuit with theirs. 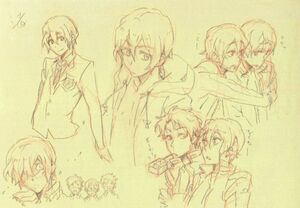 Hiroko Utsumi said that Nagisa was the cute younger brother type of character. He always acts childish for his age, even though he's not even a year younger than the rest of the group. Nagisa is the only one who physically plays around with Rei, but since it's Nagisa, Rei's good points are brought out. He's the one who is able to bring out everyone's various expressions. His outer appearance also feels childish with his big and round hairstyle. His personality is that of a natural airhead; everything goes over his head. He's the type of person who gets by on instinct. As soon as he thinks of something, he acts on it instantly. Nagisa has a lot of small penguin accessories because he loves big penguins. In the first episode, you can get a glimpse of his underwear which has penguins on it. He enrolled in Iwatobi High School wanting to swim again with Haruka and Makoto, but there was actually another reason - "Iwatobi" in Iwatobi High School means "rockhopper penguin". With that kind of inspiration, he easily made his decision where to apply. Futoshi Nishiya added that "He's a cute character, but as a first year high schooler, his body is a bit tense. He's not just cute and, while he does say some stupid things as he pleases, he's not an idiot. We drew him carefully while examining the rest of the cast to maintain balance among designs." His character is very important to help move the story along.

Retrieved from "https://free-anime.fandom.com/wiki/Nagisa_Hazuki?oldid=55029"
Community content is available under CC-BY-SA unless otherwise noted.