He voices Rin Matsuoka in the Free! series, and performs the ending themes SPLASH FREE, FUTURE FISH, and GOLD EVOLUTION, along with other voice actors of the main characters, Nobunaga Shimazaki, Tatsuhisa Suzuki, Tsubasa Yonaga and Daisuke Hirakawa, together known as STYLE FIVE.

Outside of the Free! series, Mamoru has voiced popular characters in a variety of anime, drama CDs & games. Many of these roles have meant working alongside his fellow Free! voice actors, most notably performing character and idol unit songs. 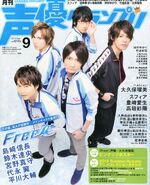