Kiyohumi Haishima (蓜島 清文 Haishima Kiyohumi) is a supporting character in the anime series Free! who appears in Free!–the Final Stroke– the second volume. He is the older cousin of Kaede Kinjo and appears to be an old friend of Ryuji Azuma and Mikhail Makarovich Nitori.

Kiyohumi is a man with dirty blonde hair and bright blue eyes. Despite being relatives, he and Kaede do not share many physical similarities. In his main appearances so far he is seen wearing a distinctive yellow/orange bucket hat. 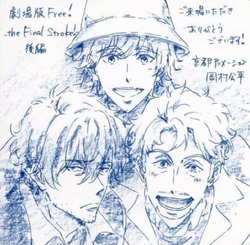 Translation Note: Most information relating to this character is roughly translated from a piece of media still in cinemas, as such, all related facts may be subject to change/corrections in the future when official translations are released.