Ayumu Kunikida (国木田 歩 Kunikida Ayumu) is a minor character in Free!-Dive to the Future-. She is a 1st year high school student at Iwatobi High School and a new member of the Iwatobi High School Swim Club under Rei Ryugazaki's captaincy, acting as a co-manager with Gou Matsuoka.

Ayumu is of small stature with short, dark blue hair that curls outwards and olive green eyes. She is usually seen wearing the Swim Club uniform.

She seems to be quiet and soft-spoken, but rather blunt in her statements. She doesn’t like muscles much, preferring someone with a little fat on them, much to Gou’s horror.[1] 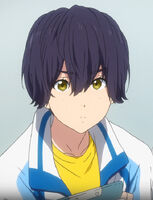 Retrieved from "https://free-anime.fandom.com/wiki/Ayumu_Kunikida?oldid=44863"
Community content is available under CC-BY-SA unless otherwise noted.