Albert Volandel (アルベルト・ヴォーランデル Aruberuto Vōranderu)[1] is a swimmer from Sweden who is the current world's record holder in both the 100m and 200m freestyle event.

Albert is a Swedish man with light blond hair swept to the left side of his face, with one eye hidden behind his hair. He has purple eyes and pale eyelashes. He has a tall, muscular build.

Albert holds the world's record in both 100m and 200m freestyle. Haruka meets Albert at a special training camp without realizing who he is and they establish a friendly rapport. Albert admires Haru's swimming style and power telling him, "the water favors you. I can tell." At the conclusion of Dive to the Future, the outcome of Haru's final heat is pending, but Haru is seen gaining the lead. Albert is seen listening to the race over the TV, with a smile on his face.[2]

Albert meets Haruka at a special training camp for swimmers preparing to compete at the All-Japan Invitational. Haruka doesn't realize who he is but when he sees Albert having difficulty ordering food from a Japanese cafeteria menu, he steps in to assist. They establish a friendly rapport while having lunch together with Haru is surprised to learn that Albert enjoys eating mackerel, like himself. During a recreational swim, they race one another and Haru quickly realizes that Albert is special. However, it's not until an informal group competition that he learns of Albert's actual identity with said swimmer easily winning and Haru coming in a distant second place. It is at that point that Haru begins to understand that this is the caliber of swimmer he will be competing against at the global level.

Rin is equally warned against swimming with Albert without being fully prepared by his coach, Mikhail Makarovich Nitori, who says Albert's swimming is "out of this world."

Albert at the arcade.

Albert, while having lunch with Haru.

Road to the World - Preview screenshot 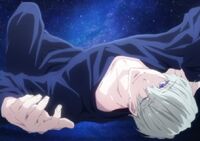 Midnight Dream series - Albert
Add a photo to this gallery

Retrieved from "https://free-anime.fandom.com/wiki/Albert_Volandel?oldid=43252"
Community content is available under CC-BY-SA unless otherwise noted.