Aiichiro Nitori (似鳥 愛一郎 Nitori Aiichirou) is a supporting character in the anime series Free! beginning with Free! As a third-year high school student at Samezuka Academy, he is the captain of the Samezuka Swimming Club. 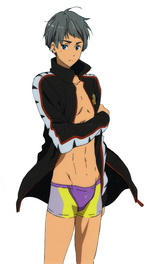 Aiichiro has light blue eyes and short gray hair with straight bangs. He appears to be the shortest member of the Samezuka swim team, but nevertheless, is about average height. A notable feature of his is a beauty mark, which is located diagonally under his right eye. His swimwear is a purple and yellow square-leg swimsuit, and he is sometimes seen wearing a Samezuka Academy jacket.

He is a friendly and slightly chatty person, sometimes saying a little too much, like when he mentions that all the Iwatobi swim team members have girly names only to be reminded by Rin Matsuoka's glare that Rin also has a girly name. He is a hardworking swimmer who recognizes his own limits, but often pushes himself to extremes in trying to improve. He admires Rin to the point of wanting to specialize in two swimming styles (breaststroke and freestyle), just like him, and does anything he can for Rin. Aiichiro remains a bubbly person, never giving up, even when Rin snaps at him or finds him annoying.

Probably because they share the same room, he often does the same things as Rin. He looks up to Rin and feels sincerely happy for his victories. He participates earnestly in club activities and is a hard worker.[6] At one point, Aiichiro feels miserable and frustrated with himself, since he was unable to participate in his preferred event. Because of that, he was unable to understand Rin who, although he was able to participate in any event, only participated in the 100-meter free.[4][4]

When Rin says that he would "see his father," Aiichiro misunderstands him and sobs, "No, you can't die!" with pure tears coming from listening to Rin's obstinate heart. More so than his tears, his crying face was emphasized. During the joint practice with Iwatobi High School, the side of Aiichiro who firmly separates business is shown when he urges Rei Ryugazaki, who isn't wearing a swimsuit, to change.[7]

In elementary school, Aiichiro is in the same swimming competition as Rin, Haruka Nanase, Makoto Tachibana, and Nagisa Hazuki. However, he and his team lose in the prelims. Even so, Aiichiro is extremely moved after watching Rin and everyone else's winning relay. Ever since, he has looked up to Rin.[7]

The director of Free!, Hiroko Utsumi, commented that if you left Rin alone, he would be isolated without anyone, so there needed to be a character — more like a conversation partner — who would draw him out. The character born out of this need was Aiichiro. Aiichiro's role was to draw out Rin's heart. Because Rin could understand parts of Aiichiro that were like himself, he felt like talking to him. Aiichiro is not discouraged by Rin's hard-heartedness, and is unexpectedly bold, as well. Utsumi added that he's a very cute kohai. The character designer, Futoshi Nishiya, said that from the very beginning, he was to have bobbed or "mushroom" bangs. That way, there wouldn't be conflicts with other characters' designs, and Aiichiro could be drawn smoothly. At first, there was a version of him wearing eyeglasses, but it was scrapped as unnecessary. Since Aiichiro is a boy with a cute feeling, the staff had to be careful not to clash his design with Nagisa Hazuki's design. For his hair, they first thought about some a green pattern, but settled on a bluish-grey silver.[6]